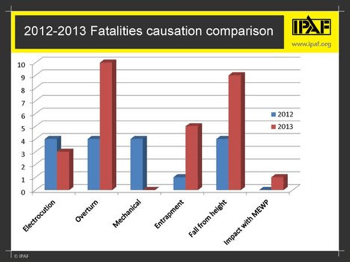 August 21, 2013
IPAF has issued its half year accident database report, with 28 fatalities involving work platforms recorded so far in 2013.

The fatalities involved overturning (10) followed by falls from platforms (9), entrapment (5), electrocution (3) and impact with aerial lift (1).

13 of the incidents involved self-propelled boom lifts, 10 for scissor lifts and three vehicle mounted lifts. In two cases the machine type was unknown. Almost half of these fatalities occurred in the USA (13), with two occurring each in France, Germany, the Netherlands and the UK. Armenia, Canada, Ireland, Malaysia, Norway, Spain and the UAE also each recorded a fatality.

The number of fatalities reported for the first half of 2013 is around 65 percent higher than in the same period last year, which saw 17 fatalities reported, howeve IPAF believes that this is due to the accident reporting project capturing more data and not necessarily that more accidents are occurring. 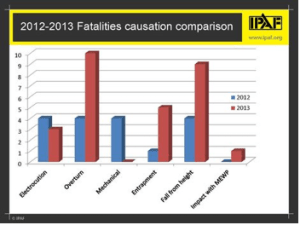 IPAF chief executive Tim Whiteman said: “Findings from IPAF’s rental market reports lead us to estimate that there are more than one million aerial lifts in the world. Every fatality is one too many, but these figures show that powered access equipment remains a safe way to carry out temporary work at height.”

IPAF technical officer Chris Wraith added: “The accuracy of the data relies upon those using aerial lifts and other interested parties to report any known fatal accidents to IPAF at www.ipaf.org/accident or to an IPAF member of staff. The comprehensiveness of the data cannot be guaranteed, but where appropriate, action is taken to verify the facts. The data is updated should relevant information become available.”

IPAF launched its accident reporting project in January 2012 with the aim of building up a comprehensive record of known accidents in a common format. The data gathered enables IPAF and the industry as a whole to analyse, look for common trends and propose possible actions to further improve and promote the safe use of powered access worldwide.